Lessons of the Hurricanes

We have been through a number of hurricanes since moving to and all of them seem to be somewhat different than the others, but there are some consistencies that we have discovered in all of them, at least so far.

Almost all hurricanes develop off the shore of Africa and become a REAL storm as they pass westward through the warm . Now, there are advantages of this fact to us personally since our house is on the side of a mountain perched above . This location makes it necessary for any hurricane which would have any major wind effect on and especially our home to come directly over mountains to get to us. In most cases as hurricanes pass over elevations their wind speed decreases, which mean that in most cases a category 4 or 5 has little chance of reaching us. The worst I remember thus far has been that of Hurricane George back in (a long time ago) getting up into the high 80-90mph around here.

Probably the only way hurricane winds could devastate this area of would be if it were to pass , say on the south side, then reverse course, and head into the . This would set up a very highly dangerous situation since ’s capital has no protection from the west. If this scenario were to take place lives would be lost by the thousands in City Soleil alone and most of the city would be devastated. I have never seen this happen in , never knew of it happening, and certainly hope that it never happens.

Most of the problem we run into in our area is with water. The rain is usually heavy and almost unceasing. Thus we have flooding and also due to the lack of ground cover in many areas the soaking rain causes large layers of land to simply slide down mountains destroying total communities and the loss of life is great. This happened about four years ago in the area of Prospere, where my clinic is located. In one village that night almost 2000 persons perished.

So what about Hurricane Dean? We personally saw very little high wind. I would say the top speeds were possibly in the high 30mph range. Yes, there was a great deal of rain but we have yet to hear about any major devastation from it. Word is that there were three who lost their lives from the storm in

Please understand, I am not saying that Dean didn’t have any devastation on the lives of Haitians but simply that the effect was fairly minimal in our living area. Especially the areas near Jacmel, LesCayes, and Port Salute, where they were much nearer to the eye of the storm, the lives of many were simply devastated. Do keep these in your prayers as you walk in the sunshine. 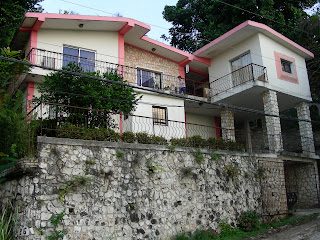 Posted by John and Jodie Ackerman at 9:56 AM