Although we began to see patients at the clinic last month there has been something missing since our return. The missing part has been the people from Bellefontaine. Now they’re back.

Bellefontaine is a small, poor farming community that is far from the main streets of and even far from the doorstep of our clinic at Prospere. I have noted a number of our regular patients were walking for many hours over the mountain but had no idea what sacrifices they were making to get to our humble clinic. Just for our own knowledge Eden and I took a day and drove out to Bellefontaine about three years ago. It took about 8 hours to get there driving on roads on the ridge of mountains then down in river beds where the 4 wheel drive was an absolute necessity. The wear on our bodies and the vehicle was enough to make us realize that a clinic out in this area, although having large numbers of patients, would be impossible to do on a regular basis. We were happy to visit the home of many of our patients but a regular visit was just not in our future.

So instead of our going out to them the people of that community have become regular visitors to ours. But, since our return in September we were seeing none, until this week. The lady at the bottom of this blog is Mdm. Charles Mandeau. She and a friend came in complaining about their aches and pains. (Who wouldn’t have aches after walking all that way?) They said that they had left home the afternoon of the day before and arrived at 11pm that night. They spent the night sleeping in our new waiting area. They had crossed a number of streams on their way and said that the persistent rains have been what was making it impossible for them or anybody else from Bellefontaine to make it to the clinic. 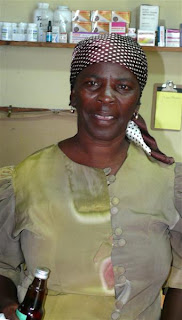 Posted by John and Jodie Ackerman at 10:15 AM