When visitors come to one of the things that many of them are surprised to see are the number of people who are carrying and using cell phones. Actually we have three very active cell phone companies in . Two of them, Voila and Haitel are under Haitian management but Digicel is a fairly large international company who has just recently (two years ago) come to . When they came in they came in with a bang. The first month they offered free phones to anyone who had Voila or Haitel phones who would exchange them for a better phone and charges that were cheaper. Needless to say the Haitian companies weren’t all that happy to have the new visitors in town and often let it be known that it was just unfair that their government would allow foreigners to come in and give competition to the home team. But there seems to be enough room for all three companies to function here without a lot of loss in income. It’s still fascinating to watch each of them come up with new gimmicks in order to get the people in their front doors.

This is a picture of the front wall of a Digicel office located in the Delmas Area. If you can’t make it out, it is a line of people waiting with their cell phones and chargers to get a chance to charge their phones from the extension cords that come from the Digicel office. That seems like a great idea to me. They must have realized that most Haitians only get two hours of electricity a day. I would say Digicel has done their homework. 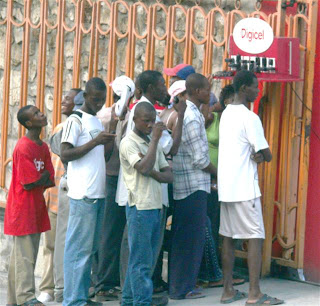 Posted by John and Jodie Ackerman at 6:50 PM