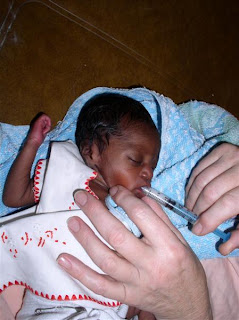 Couldn't happen to me!

Well, maybe it could. I got an email from a lady on the west coast that I knew very little about other then I felt she was a good person and was basically interested in humanity. She was originally an Australian but I came to know her when she visited Haiti a number of years back and spent a day at one of my clinics. That happened to be one of those sort of unforgettable days that we have occasionally at the clinic. On that day a mother brought her three week old baby of whom she had given it nothing to eat for the past five days because the baby was sick and she thought her milk "wasn't good." We spent most of our afternoon pumping the mother's breast, collecting the milk, and giving it to this almost comatose baby via a 3cc syringe. Since Kay had little else to do she was the designated syringe/milk handler. We took lots of pictures and have used that picture of Kay's hands at work trying to keep this extremely little one alive at almost every church where we visited for the past four years. I have kept in occasional contact with Kay and we even recently became official Friends on Facebook. You should know that a friend on Facebook is almost one step above marriage if you know what I mean.

So now to the email. Actually it was not an email but rather a direct message that was sent to me through Facebook. She first told me that she had something very important to talk with me about as soon as she heard from me. I wrote back and asked her about her problem.

Kay introduced it by letting me know that she had been traveling in Africa with a group that visits one of three extremely impoverished countries and works with clinics that deal with the HIV problem. She was in the country of Nigeria for the past couple weeks but yesterday she was riding in a taxi, forgot her purse when she got out, and had the purse, all her money and credit cards stollen, and her passport was gone. Knowing Kay, this could all be credible.

Then she went on to tell me that the management of the hotel where she was saying was irritated with her knowing that there was a chance that they wouldn't their money. She went on to say that she didn't know what else to do except write to me to see if she could humbly ask me to loan her $1050 for her hotel bill and $1350 to help her get another plane ticket and also for food until she make it home.

Now Kay is a friend of mine (I did say that we were friends on facebook didn't I)but not one that I would think of as a last ditch effort to keep me from being roughed up by hotel owners in deep dark Africa. So, I told her I'd get back with her.

I then wrote to her via her Hotmail account which I didn't think would be used by anybody but her, let her know that I thought someone else had probably stollen her Facebook account and was using it to try to get money out of her friends. BUT, if it was really her in need that I would try to get some money to her in time for her to hold off those evil hotel thugs.

A couple hours later I got the followup via Hotmail that she understood why I had question but that it was really her and she was still in great need.

I responded that I needed her to send me the name and address of the hotel where she was staying along with their phone number. Also I needed at least her home phone number and the phone number of at least one other friend that is near her home on the coast.

Then it hit me that I had the email of the person who first directed Kay to my work here in Haiti. So I wrote to Sandra, sent her all my emails both received and sent from "Kay," and asked her to try to get hold of someone who could confirm this awful story before I began to break my piggy bank to send it to Africa.

So, there you have it. I just let them, whoever them is that I will call them soon as I can when I get in from my clinic tonight. Would love to get these guys.

And so it goes
Posted by John and Jodie Ackerman at 2:08 PM