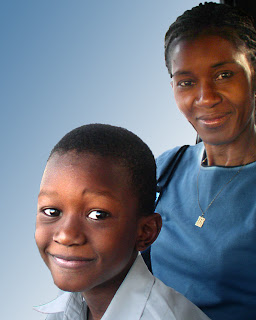 Junior and Eden
I have worked at the Prospere Clinic since 1992 and ever since then I have worked with Eden, a Haitian Registered Nurse.  In the earthquake in January, she lost her 12 year old son Junior and her 17 year old daughter, Whitney was rescued from the rubble after five days.  At present Eden and Whitney are still inNew York whee Whitney is still going through therapy.  I came across this picture on my computer this summer.  It turns out that this is the only picture that Eden had and now we know that it is the only picture of him that she will ever have.  I'm so happy I took it and was finally able to find it.
Posted by John and Jodie Ackerman at 8:43 PM

What a horrible tragedy... What was Junior's last name? I am trying to find the names and pictures of as many Haitian children who were killed in the merciless earthquake and I think Junior deserves to be added. If you could give me his last name, I would be very appreciative and if not I understand but would like to ask for permission to use his photo.

Thanks and God Bless everything you do,
Philip