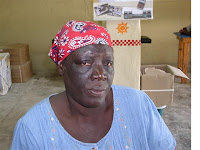 This week I had a lady come into the clinic claiming that she was 7 months pregnant. She actually didn’t know her age (a very common thing here) but from all I could decipher she was at least in her 50’s. Of course I did check her out and although her abdomen was rather large it obviously wasn’t a fetus that was making it that way.

So I went on to explain to her that she wasn’t pregnant, and I advised her that she would probably never again carry a baby in her uterus except through a miracle. I then advised her that I wasn’t in the practice of miracles today so I went on to find out why she did think she was pregnant. The reason was that she had missed periods for seven straight months and there was no other reason for that that problem then pregnancy.

Don’t get me wrong, I’ve seen this number of times since I’ve begun working here but it never stops blowing my mind that someone in this lady’s life has never explained the simple basics about what lays ahead for her. Has she never seen this happen in others around her and question it? Did her mother do nothing for her other then teach her how to wash clothes? Does she communicate with nobody intimately enough that they would discuss such things? Do people talk in this country? Got me!

Posted by John and Jodie Ackerman at 7:59 AM No comments:

Remember the man I saw on the road a couple days ago? Well I have more information on that one. Actually the information came to me due to a personal occurrence at our house two nights ago.

It seems that a group of men were trying to climb over the walls that surround our house at about 2am. We have an armed guard at the house already due to the fact that a couple years ago we were getting robbed so often that it was getting hard for us rationalize paying the TV cable bill because our TV was being stolen so frequently. So, our guard heard the men attempting to get inside and simply shot over their heads which instantly turned these future robbers into sprinters. Don’t tell anybody but our guard doesn’t imagine actually shooting a person. He just treats his little pistol as a scare weapon which usually works when the intruders are usually extremely afraid of dying. I have no idea what he would do if anyone would challenge him.

So the next day I come to find out that there was an attempted robbery further down the hill on the same night. Robbers broke in a home and found the owners wielding their machetes which, it seems they really knew how to wield. One of the intruders was killed before the other two escaped without fatal injuries. We believe the dead one was later deposited on the road as a sign that robbery was not the profession to be in.

What bothers me most about this though was that I felt better knowing that the person on the street was one of the “Bad Guys.” I don’t know if Christ would have felt that way. I think he would probably simply have wept for humanity. I am supposed to be one of his disciples. I guess I’m not doing a very good job. Keep me in your prayers.

Posted by John and Jodie Ackerman at 9:20 AM

Death
One thing that is different here in Haiti then what I had experienced while growing up in the US is that the dead are not protected from onlookers. Before coming here I had seen at least one blanket covered body lying beside an accident site but never one where the body would lie there unprotected for all to see. Here a death attracts crowds. There is usually a circle of people who just stand hanging over the body and gaze like it was something they had never seen before. This has always amazed me since there is so much more “open” death here. They don’t usually sterilize death here by putting the dying in a curtained area in a hospital room so family and religious leaders can pray and sing hymns as the loved one leaves the earthly life. That’s the way I remember it was when my father and mother died.

When a parent or elder in the majority of Haitian families die they usually die at home with all the kids and neighbors around staring as the person passes on. It’s noisy. Usually at least one of the kids or attendees are screaming and letting God know that it isn’t time for this person they love so much to die. This is often done by a person who doesn’t even know the dying person. Even on the roads or highways when there are persons who are hit by a car and die or who are sick and just happen to be in public when they die there is usually a group of persons who simply gather in a circle around the body and gaze. Why?

That wasn’t the way it was yesterday morning though. As I went down Montagne Noire (Black Mountain), where I live. There were a few persons standing in the general area of a body but none seemed to have a desire to stand too close. No prayers for this guy. The body of the man who was probably younger then 30 years old and was lying on the left roadway which made it easy for me to avoid it. As I drove by I noticed that it had been an awful death. I can’t say that there were gun shots in the body but it had been badly bruised and beaten before finding its final home on the blacktop. All I could think was “I hope this wasn’t here when Jessica and Jodie went by here to school this morning.” It was. That was the first thing Jodie asked me about when we talked later.

I’m not sure how long this young man’s body had lain there. But on my return after a couple of hours it was gone. That was good. I have seen them lie in the road for three days before taken away. I haven’t heard any of the stories about what really happened but only because I didn’t feel all that safe to ask.

And so it goes! Life in Haiti.

Posted by John and Jodie Ackerman at 8:30 AM No comments: