Let's just call this one the second world “Super” playground in a jungle setting. Actually we rode on the bus about two hours this morning to get to the tour area. The setting is a mountainous area (not Pike’s Peak, more like the ) with a lush covering of Canopy trees.

Arranged at various places in this forest are towers that remind one of the fire towers you would sometimes see if driving through areas of the mountains of or . These towers are connected with other towers by 1/2” metal cable.

Now, that is the setting. Here is what happens. Humans just like you and me get themselves in a harness, climb these towers, hook our three safety cables and roller wheel to the cable and launch ourselves, suspended only by a harness, down this cable at high speeds and often high elevations until we reach another tower or platform high up in one of the trees. From there the same thing is repeated again and again to other trees and towers.

Why do we do it? I guess because we were in and that is what you do in . Some people say it’s because of the ability to be out in the open to see the beautiful jungle (flying past at 90mph?). No. I believe we do it because we’re human and there’s something that is God given inside us that calls this little bit of abandon “FUN.” It was a fun day.

I wish I could show you some great pictures to give you an idea of what it was like but I don’t know how to put videos on this blog yet so you’ll have to put up with my still pictures. If you really would like to check out some videos of what actually happens simply direct your browser to www.youtube.com and search for “Costa Rica Canopy Tour” and you will be shown about 150 different videos you can see first hand.

Tomorrow I’ll try to give you a little idea of the wildlife on a river tour that we took in the city of .

And So It Goes! John 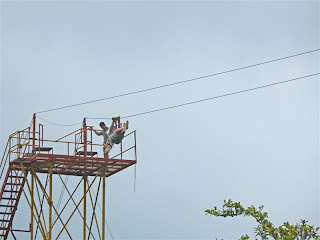 This is where the Crazy people go off! 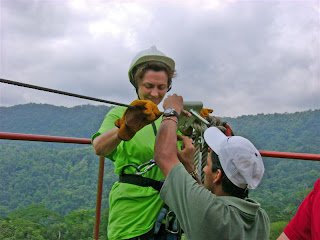 Jodie in her fashion Hat 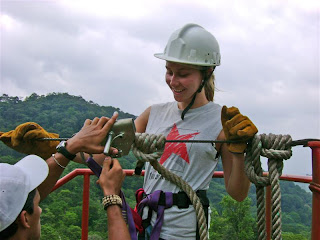 Jessica now wants to be a sky diver!

Poor, scared people knew we were going to die! 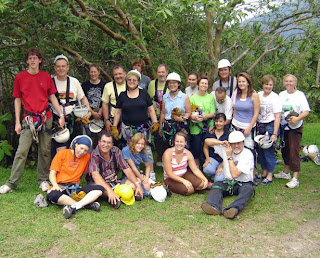 
Posted by John and Jodie Ackerman at 4:54 PM