We Treat our Visitors Well!

We have a couple of friends, Ron and Carol visiting us this week from , my home town. They are here evaluating our work at Prospere for a work team to come in the near future. The week has been busy with the added problem of having to drive to the clinics through the fields instead of on the roads, due to the recent flooding and the added dental clinic that Medical Mission International did in Prospere. All considered though, the week went well.

Then last night just after midnight we were awakened by a loud swish, a loud bang, and a bright light just outside our bedroom window. I got up to check what was happening just in case our unarmed guard was about to be overrun by an army or something. I couldn’t have done anything to help him but figured I should know what had happened just in case his family would ask. Leaving the room I walked out on our porch and found the following. 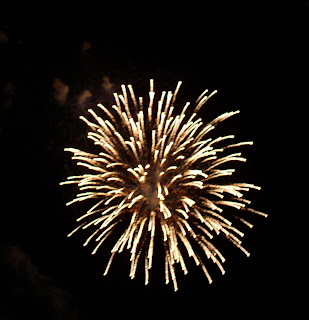 Yep, fireworks as big and loud as any I had ever experienced right over our house. They went on for about 15 minutes and I stayed out on the porch until I began to get hit by the ashes that were falling from the sky. Nobody else in our neighborhood showed their faces, not even Ron and Carol. I thought they would have heard Jodie and me talking out there but when I never saw them I just didn’t bother them. It was reported in the morning that they were scared stiff and spent their time trying to stay away from the windows in order to avoid whatever was making the banging sound. They avoided it. 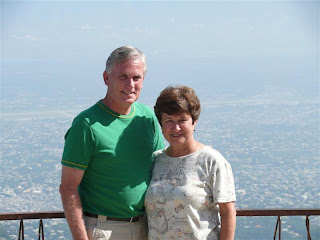 Posted by John and Jodie Ackerman at 9:36 PM